Text Bank & Training NO on Recall! 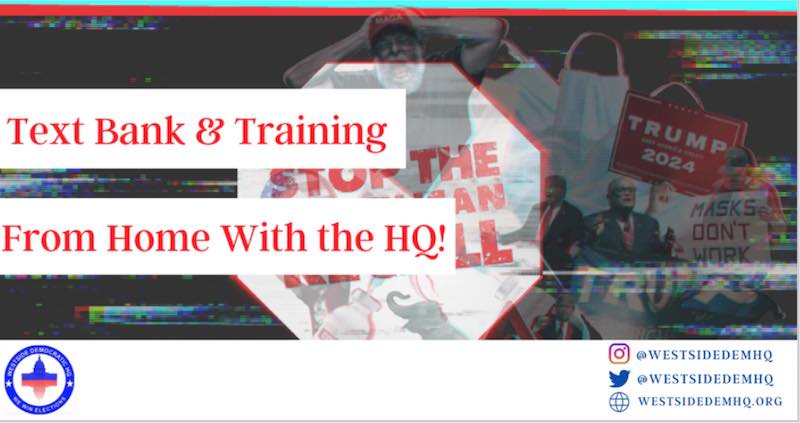 IMPORTANT:  PLEASE RSVP AT THE LINK FOR THIS VIRTUAL MEETING!

Reaching out to Californians via text message is one of the most important tools we have to stop the Republican Recall.

What is Stop the Recall? Stop the Republican Recall is Governor Newsom’s coordinated effort to OPPOSE the Republican recall in California. This recall is led by a partisan, Republican coalition that includes national Republicans, anti-vaxxers, and hardcore, anti-immigrant Trump supporters and it’s being funded by some of Trump’s biggest donors. Pure and simple: this is a Republican effort to overturn the results of the 2018 election and stop our state’s progress on COVID recovery. Governor Newsom won’t be distracted by this recall – he’ll keep his focus on California’s recovery. That means it’s up to us to take action together to stop the recall.

When is the vote? The vote has been scheduled for September 14. Governor Newsom signed an executive order earlier this year mandating that each registered voter will receive a mail-in ballot for all elections in 2021.

How does the recall vote work?/Why should I be concerned? If more than 50% of voters say “yes” to the recall, the candidate who gets the plurality of votes in the 2nd question will become governor. This means a Trump ally with 30% or less of the votes can possibly become governor. During the 2003 recall, Gray Davis was recalled and a Republican became governor without a majority vote. We can’t be complacent because it would be a huge mistake to allow the GOP to force a Republican into the governorship.

Sign up to join the HQ for a text bank and training on how we are going to Stop the Republican Recall!